Lecture 2. Out of the Earth: The Global Journeys of Ceramic Tile 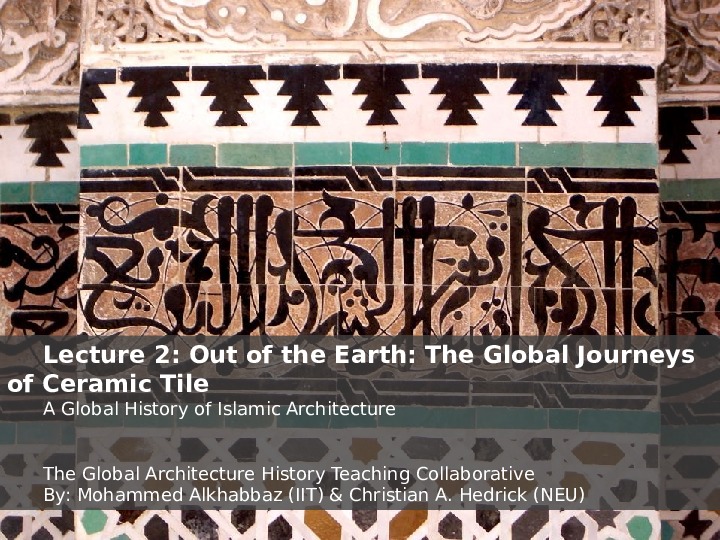 One of the most ubiquitous and prolific decorative materials found throughout the history of Islamic art and architecture is the ceramic tile. Tiles in a variety of forms are found throughout the history of Islamic architecture including: those inherited from the Byzantines and Sassanians, the East Asian white porcelain tile, as well as luster tile and faience, to further developments such as overglazing and the discovery of fritware techniques and underglazing. While it is generally accepted that lusterware techniques are Islamic in origin, other types of tiles found throughout Islamic buildings exhibit clear influences that belie origins well beyond the borders of the early conquests. One such controversy has to do with the appearance of tiles in ninth-century Mosques such as the Jami' Uqba Ibn Nafi', Kairouan, Tunisia (the Great Mosque of Kairouan) (670/50 AH; rebuilt 699/80 AH; rebuilt 836/221 AH) in North Africa (Ifriqyya) that exhibit a clear Chinese influence. The so-called “Opaque White-Glazed Group” exhibits three influences: the type of glaze originates in pre-Islamic Sassanian and Pathian traditions, the shapes can be traced to Chinese “porcelaneous white wares” which began to appear in western Asia in the middle of the 8th cen., and the decoration method was typical of contemporary workshops. Furthermore, this type of white-glazed pottery/tile with the famous blue designs (on a white back) can be found in Islamic pottery examples that pre-date those of the Chinese (the style that Yuan, Ming and Ching potters would make universally famous). Another decorative technique, known as lustre-painting, emerges from Basra (Iraq) and spread (despite its supposedly secret production techniques) quickly from Iraq to production centers in “Tunisia, Algeria, Egypt, Syria, Iran, Spain, Italy, England and eventually America.” It is generally accepted that a ninth century governor of Kairouan, Abu Ibrahim Ahmad, imported ceramic tiles from Baghdad for a reception room. In a religious act of piety to atone for sins he decided to give the imported tiles to face the mihrab in the great mosque where they remain today. A number of questions arise: 1. How did tiles exhibiting a clear Chinese influence find their way into the mihrab of this mosque in North Africa? 2. Where were the tiles made and who made them? 3. If they were made in China this would be a distance of well over 7,000km (to, for example, a Western Chinese trading center such as Xinjiang)? 4. If they were, instead, made in Baghdad in a style imitating Chinese tiles, as some scholars have suggested, then how and why were they transported to this distant location in Ifriqyya? Not only do the presence of such tiles, which arguably exhibit “foreign” styles and techniques, in distant locations suggest the continued interconnectivity of trade routes with eastern Asia, but the translation and interpretive evolution of these styles from one context to another. Moreover, the transportation of ceramic and/or its raw materials was extremely difficult and so potentially its availability was dictated by the availability of (local) raw materials. If this is the case, and the tiles were not transported, then the focus shifts to the potential avenues for the transfer of knowledge that made it possible to produce and develop specific types of ceramics for particular uses. The lecture will begin with this premise and analyze a number of other structures along the route (ultimately between Baghdad and the Iberian Peninsula) that reveal the aesthetic and political reach of the Abbasid Caliphate. What these different tiles mean in various contexts has never been realized in a cohesive lecture/study to our knowledge and though this material study we intend to provide a rich and interesting insight to this still burgeoning empire by tracing this truly global material. References: Akhund, Abdul Hamid and Nasreen Askari. Tale of the Tile: the Ceramic Traditions of Pakistan. Karachi, Pakistan: Mohatta Palace Museum, 2011. Atıl, Esin. Ceramics from the World of Islam. Washington, D.C.: Smithsonian Institution (Freer Gallery of Art), 1973. Blair, Sheila and Jonathan M Bloom. And Diverse are their Hues: Color in Islamic Art and Culture. New Haven; London : Yale University Press/ Doha: The Qatar Foundation, School of The Arts in Qatar, 2011. Boardman, John “Reflection on the Origins of Stone Architecture” Bulletin of the Asia Institute, New Series, Vol. 12, Alexander's Legacy in the East Studies in Honor of Paul Bernard (1998), pp. 13-22 Bobin, O., M. Schvoerer and C. Ney. “Where Did The Lustre Tiles Of The Sidi Oqba Mosque (AD 836–63) In Kairouan Come From?” Archaeometry 45, 4 (2003): 569–577. Millner, Arthur. Damascus Tiles: Mamluk and Ottoman Architectural Ceramics from Syria. Munich; New York, NY : Prestel, 2015. Degeorge, Gérard and Yves Porter. The Art of the Islamic Tile. Paris: Flammarion, 2002. Ettinghausen, Richard Oleg Grabar and Marilyn Jenkins-Madina, Islamic Art and Architecture 650-1250. New Haven: Yale University Press, 2001. Herbert, Tony and Kathryn Huggins. The Decorative Tile in Architecture and Interiors. London: Phaidon Press Ltd., 1995. Komaroff, Linda and Stefano Carboni. The Legacy of Genghis Khan : Courtly Art and Culture in Western Asia, 1256-1353. New Haven ; London: (Metropolitan Museum of Art) Yale University Press, 2002. Lane, Arthur. Early Islamic Pottery. London, 1947. Mason, Robert and Edward Keall, “The Abbasid Glazed Wares of Siraf and the Basra Connection: Petrographic Analysis,” Iran 29 (1991): 51-66. Michaud, Roland and Michael Barry. Colour and Symbolism in Islamic Achitecture: Eight Centuries of the Tile-Maker's Art. London: Thames and Hudson, 1996. Öney, Gönül. Ceramic Tiles in Islamic Architecture. Istanbul : Ada Press Publishers, 1987. Pickett, Douglas. Early Persian Tilework: The Medieval Flowering of Kash. Madison; London: Fairleigh Dickinson University Press, Associated University Presses, 1997. Tampoe, Moira. Maritime Trade between China and the West: An Archaeological Study of the Ceramics from Siraf (Persian Gulf), 8th to 15th centuries A.D. Oxford: Oxford University Press, 1989.