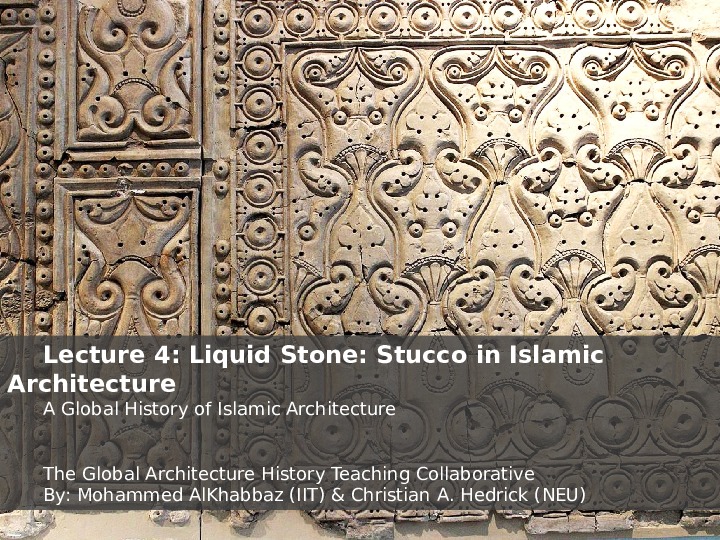 Stucco was first employed in Iran for the primary reason of a lack of building stone. It was used in this way to not only conceal the surface inconsistencies in brick, the dominant building material, but also as a transitional material between various wall surface media. Through decorative ornamentation and geometric patterning inconsistencies in the wall were covered. It soon became a dominant architectural feature firmly associated with the Abbasid caliphate. However, since stucco was such a popular medium through which ornamentation and metaphorical meaning could be expressed, it gained a greater cultural significance such that it became a preferred material throughout the Islamic empire despite various local traditions of stone or other types of carving. Use of stucco continued to grow throughout the Islamic lands despite political fluctuations until the 15th century. It was not to see a resurgence until the Safavid Empire in 17th century Iran. The lecture contains four parts. The first part is an explanation of what stucco is ( its physical makeup and process of making). In the second part, an overview of the historical development of stucco. A review of the reasons behind the central role of stucco in Islamic art and architecture is discussed in the fourth part. Finally, the lecture covers the spread of stucco throughout the abbasid empire between xx and xx centuries. References: Allen, Terry. Five Essays on Islamic Art. Sebastapol, CA: Solipsist Press, 1988. In particular see chapter one: “The Arabesque, the Bevelled Style, and the Mirage of an Early Islamic Art, especially p.10 f. Blair, Sheila S. and Jonathan M. Bloom et al. "Stucco and plasterwork." Grove Art Online. Oxford Art Online. Oxford University Press, accessed August 5, 2016, http://www.oxfordartonline.com/subscriber/article/grove/art/T081969. Graves, Margaret S., editor. Islamic art, architecture and material culture : new perspectives. Oxford : Archaeopress, 2012. Maʻrūf, Nazīh, E. İhsanoğlu and Y. Ozer. The first International Seminar on Crafts in Traditional Islamic Architecture. İstanbul : Research Centre for Islamic History, Art and Culture (IRCICA); Egypt : Ministry of Culture, Foreign Cultural Relations, 1995. Proudfoot, Trevor et al. "Stucco and plasterwork." Grove Art Online. Oxford Art Online. Oxford University Press, accessed August 12, 2016, http://www.oxfordartonline.com/subscriber/article/grove/art/T081969.