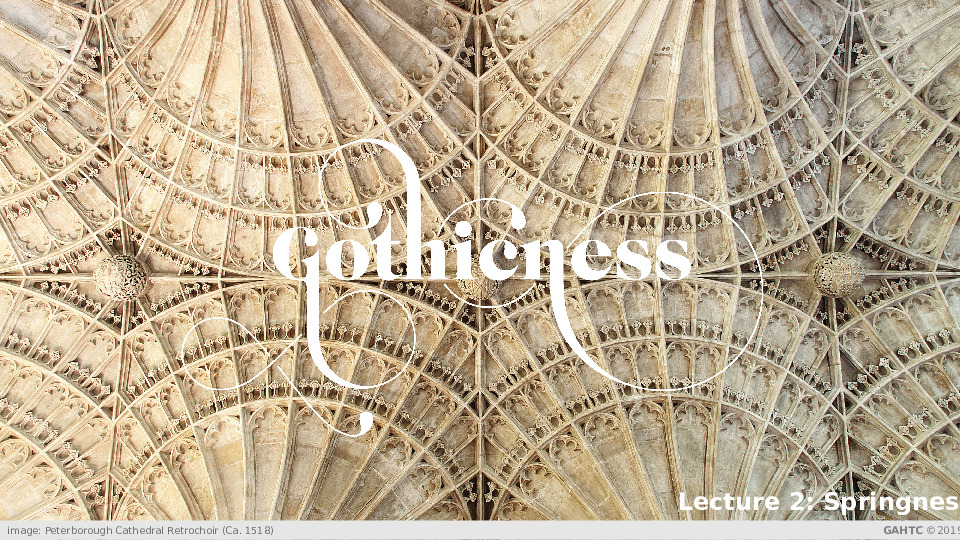 A springer is the first stone above a column in an arch, and the springing point is the moment of transition between the logic of support and that of load. The concept of the springing point is open to expansion; for instance, it may refer to a branching moment from primary to tierceron ribs in a vault (see Vaultness), or countless other examples where few need to multiply into many. Because the springing is fundamentally a transition moment, it encompasses the continual struggle through medieval architecture of reconciling various geometries--the earliest ribs, such as the Islamic ribbed domes of Bab Mardum in Toledo functioned to create new apparatuses for sophisticated vaults with horseshoe-shaped springing. The crossing is a classic moment of transitioning a square in plan to a circle above for the structural dome. As a result of this struggle, the squinch, pendentive, and other resolution geometries serve as springing points. If a springer is a type of stone, and springing point is a location, Springness is the art and nature of resolving singular into multiple by confusing clear distinctions. The concept of Springness animates the convergence (or divergence) of multiple elements into singular elements that are carved to appear as multiple elements. It confuses the eye into considering a continuous system while resolving practical concerns. This motivation can be seen in both Pierness and Vaultness, though in both, this motivation transforms over time, or occasionally in a single cathedral, but with Springness, this blurry transformation exists in a singular precious moment. This lecture examines the archetypal problems and solutions, such as dome transitions – Lintel, Squinch, and Pendentive. It also identifies the conditions that require a springing stone in transition from pier to vault. Finally, it examines a series of case studies through lenses of gothic evaluation criteria, such as Illusion & Deception, Changefulness, and Redundance. These case studies include… 1. Peterborough Cathedral, Great Britain. Retrochoir. Ca. 1518. 2. Tatev Monestary, Armenia. 9th-11th century. 3. Mosque of Ahmed Shah in Ahmedabad, India. 15th century. 4. Great Mosque of Kairouan, Tunisia. Ca. 817-38; ca. 856 (by Abu Ibrahim Ahmed); ca. 1025. Dome over mihrab. 5. Wells Cathedral, Great Britain. Chapter House. 13th century. 6. Lincoln Cathedral, Great Britain. Chapter House. 13th century. 7. Gloucester Cathedral, Great Britain. Cloister with fan vaults. Ca. 1351-64. 8. Fan vaults at Oxford University, Great Britain. 15th century. 9. Hampton Court, Great Britain. Great Hall. 1532-35. 10. Lonja de la Seda in Valencia, Spain. 1482-1533. 11. Vladislav Hall in Prague, Czech Republic. 1492-1502. Vaults designed by Benedikt Ried. 12. S. George in Nordlingen, Germany. Begun in 1427. 13. S. Lorenz in Nuremberg, Germany. Choir. Begun 1439. 14. Great Mosque of Córdoba, Spain. Maqsura dome added 961-76 under Caliph al-Hakam II. 15. S. Hovhanes in Sisian, Armenia. Late 7th century. 16. S. Corrado in Molfetta, Italy. 12th – 13th centuries. 17. Ely Cathedral, Great Britain. Crossing. Ca. 1330. 18. Abbey of S. Mary in Sherborne, Great Britain. Choir. 15th century. 19. Cappella della Santa Sindone in Turin, Italy. Guarino Guarini. Begun 1668.