Lecture 1. The Eclectic Lasting Tradition and the Modernization of Architectural Practice 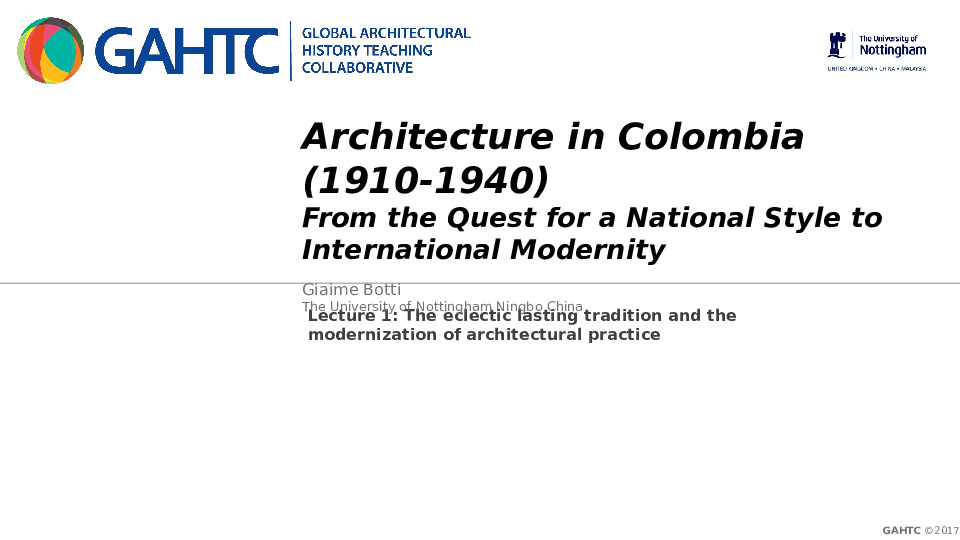 Architecture in Colombia (1910-1940): From the Quest for a National Style to International Modernity

This lecture introduces the long-lasting eclectic tradition of architecture in Colombia and the modernization of the architectural practice in the first decades of the 20th century. It firstly displays the contribution of foreign and Colombian (often educated abroad) architects and engineers in the production of eclectic buildings based on imported models, which defined a new, bourgeoise, scenography gradually replacing colonial buildings in central urban areas. Then, it focuses on the role of these actors in the design of buildings which, despite their eclectic appearance, featured important technological innovations (reinforced concrete structures, presence of elevators and ventilation plants) and marked the shift from a horizontal to a vertical city, marking another breakaway, this time in scale, from the colonial low-rise city. Alongside the presentation, textual primary sources match discourse and practice, allowing a deeper understanding about how this production was at the time evaluated by architects and critics. In its third part, after focusing mostly on major cities like Bogotá, Medellín and Cali, this lecture explores the process of modernization in peripheral contexts like the Caribbean and Pacific coast, the Magdalena and the Amazon regions. It focuses on productive settlements related to the exploitation of oil and bananas, and on the infrastructures built to increase productivity and facilitate goods transportation. It also, once again, highlights the presence of significant technical innovations within buildings that, because of their appearance or peripheral localization, have remained outside the mainstream historiographic narrative. Ties with the USA, in terms or architects’ training, imported technologies and capitals flows, are emphasized as the “fuel” of this modernization. The lecture ends highlighting the importance of the development of civil aviation not only as mean of transportation, but also as a unifying force for the country in its process of nation building, as many internal and external observers recognized during the 1940s. With this closing, the lecture reaffirms how the modernization of the architectural practice and the abandon of European models reflected a more general process of geopolitical repositioning of Colombia in the US sphere of political, military and economic influence. This lecture outlines the following themes and features buildings from the following regions: 1. The eclectic tradition in Bogotá, Cali, Medellín. 2. The hidden modernization in Bogotá, Cali, Medellín. 3. The modernization in the productive peripheries: Barranquilla, Cartagena de Indias, Caribbean, Magdalena and Amazon region.